What’s so big about Berkman?

Or, “Heading in the direction of explaining the name of this blog to others, and attempting to articulate for myself my fan’s relationship to the namesake”

When it comes to baseball, our natural tendency as fans (and really, the core feature of fandom) is to cling to particular constant elements amid a universe that is in many respects constantly changing. (We surround ourselves with constants in our non-sorting lives, too, with where possible nice homes, spouses, tattered threadbare boxer shorts we can’t throw away, antiques, mementos, etc.)

The team is the most obviously steadfast mental framework by which to organize a baseball Super-ego. It’s easy to attach yourself to a team in your hometown, or to a team that your parents follow from one of their old hometowns. It’s a natural feeling,  this long-term relationship of baseball fandom, and the requisite ups and downs, disappointments and jubilations that come with it. The locality, the typeface and logo, the uniforms, the roster that turns over at pace just slower than the arc of a player’s career: the baseball team is like the larger and more powerful gear on a three speed bike, spinning at a productive but comfortably measured pace.

The smaller gears of that bike are the players. They spin and jerk and make your heart race as you climb the hills, downshifting into the daily minutiae of fandom. Switching metaphors abruptly because I thought of a good one: if you think of a baseball fan’s attentions as a clock, the team is the hour hand, changing but slower, with a gradation that is less jarring than the second-hand jerk of a blown elbow tendon. The players are the minute hand. They spin, not too fast to manage, but you can see the movement with your naked eye as said tendons pop, young hot players get sent down to the minors and young hot players grow into old reliable players. The second hand is, let’s say, the schedule of games for the day, moving so quickly that each tick is defined not on its own terms, but on the unsettling fact that it has already passed.

All of this is to say that Lance Berkman is the player that I track along the courses of all of these complicated metaphorical mechanisms. He’s the player about whom I would say, for example, “I can’t believe he’s been in the league for ten fuckin’ years already,” because I’ve bound my own development as a sentient baseball fan to his game, to his baseball career. It’s worth delving into, this binding clause, if only for my own continued development, my own continued sentience: 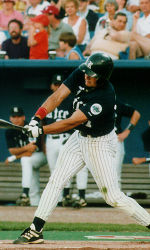 I watched Berkman play ball at Rice University (my parents are alums and I lived two blocks from the campus). I was in high school, it was 1997. I wasn’t particularly aware of him as a singular entity, as a distinct player per se, and I didn’t follow the Rice Owls with much care. It was nice for an evening to go out to Reckling Park and catch some high-level college ball when there wasn’t a high school game for me to sit on the bench for. On one such evening, I watched the switch-hitting Berkman send a pitch high into the purple night sky from the right side of the plate, one of his preposterous 41 that year, leaving him third on the single-season college list to this day (this was, I think, before aluminum bat restrictions were tightened down and the numbers levelled out).

Fellow Rice player Matt Anderson, of the 100 m.p.h. fastball, was picked first in the 1997 draft (he would fail utterly in the league and was done by age 26). Picks 2 through 15 included some pretty good players, among them Vernon Wells, J.D. Drew (who would hold out for more money and give Phillies fans yet another reason to huck D batteries), Troy Glaus, Michael Cuddyer, and Jon Garland. None of these players, however, have thus far matched the individual accomplishments of the 16th player taken, drafted by the Astros out of Houston, my team, the hometown team.

If my attention wasn’t focussed squarely on Berkman yet, the Astros pick sealed it. I was in, and I immediately and foolishly hoped for a fast rise through the minors and the big league success that all of us hope for out of our team’s first round picks. More often than not, this is an easy ticket to madness. But in this case, in a short two years Berkman drank his cup of coffee, and in 2000 he hit 21 homers in 353 at bats. In ’01 it was 34 homers and 126 RBI, and &tc. to the present day. It still feels improbable, that one of the few players I truly wanted to quickly succeed from the first day he was drafted actually did, and for more than just the token appearance in the big leagues. Berkman, in fact, rose just as quickly to the top tier of hitters in the league. 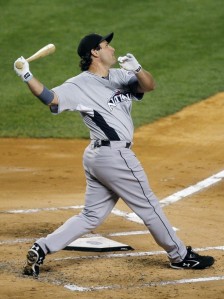 The fact of his big league success would not alone warrant something as prestigious as name-dropping him into blog titledom. Indeed, since I first watched him play for the Astros, I’ve also been a huge fan of his style. Berkman is the type of player who seems destined only for baseball: jogging slowly, for example, his gait suggests a middle-aged accountant trotting barefoot over hot beach sand. He’s a big, built guy, but he gives the impression that he’s the chubby John Kruk-type. “Beer league softball player” is a term often employed to describe him by those who like the idea, and who still cling to the old stereotype about baseball players and physical fitness (the retirement of David Wells seems to have let the matter rest for now). That type of miscalculation creates a certain amount of pleasure for the closer fan, who knows better than all of that. Berkman doesn’t have the Golden Boy stat-monster crazy-good stature of a Pujols, a Bonds, a Frank Thomas, a Teixeira, a Griffey, &tc. He’s in the class of the under-discussed, about whom commentators opine only when he’s in the home ballpark for a weekend series. When LB leaves town, the talk returns to the machine-like deities of the day. Berkman is too human to linger in consciousness for too long, like the UPS man.

Berkman is a switch hitter, but his lefty swing is to his righty swing as Matthew Broderick’s movie career is to his theater work: you wouldn’t complain about either, but it’s obvious which one pays the bills. He lets the bat drop to his shoulder a few times as the pitcher delivers. His hands are loose at the plate, and if there is a trait in a great hitter that I value, it is loose hands. Berkman waves the bat around his shins a few times, taps the front of home plate and brings the bat calmly up to his shoulder. Some great hitters coil themselves into a state of high tension with the pitch, like for example Gary Sheffield’s manic preparatory bat-wrenching. Berkman, however, lets the tension go: a state of readied relaxation that recalls a judo combatant eyeing his opponent’s next attack.

When he swings, you can feel the apparatus that is Berkman’s swing spring into production mode. The bat hovers into place, then bolts across the plate on a level plane. It may seem a stretch, but the levelness of the bat’s track, and the sureness of his wrists from the left side, remind me of footage of Ted Williams’ swing. When Berkman hits a sure homer, he brings the bat back around and sets it gingerly–pleasantly–down onto the plate.

Lance Berkman is my favorite player. The other night, in the middle of an early season slump, he did not tap his shoulder with the bat. I felt something was wrong, that he was making a small adjustment, looking for a slump-breaker. It was just that irksome to me that a tic in his batting stance made me nervous, as though a favorite scene had been deleted from a favorite movie: the plotline was still there but the chronology was almost imperceptibly altered. The chronology of Berkman’s swing, the chronology of his career, and of his team: these are the timelines of my baseball fandom, and the mirror into which I gaze as a fan. Berkman hits a ton, does his work, and has fun, which is all I can hope for from a player, and from myself.

2 responses to “What’s so big about Berkman?”